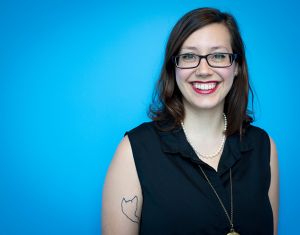 Caroline is a second year MLIS student at Simmons College, graduating in August of 2016. She has experience in managing lots of people, and is passionate about metadata, information organization, and taxonomy – all of which she handles on a daily basis in her work. Prior to working for the MLIS grind, Caroline graduated with a BFA in Textiles/Fibers & Art History from Tyler School of Art in Philadelphia, PA. She also serves as the Communications Officer for the ALA Student Chapter at Simmons.

For DERAIL, Caroline is attending lots of planning meetings, and getting her hands into every aspect of the forum to make sure things are as smooth and productive as possible. This usually means sending lots of reminder emails and giving out posi vibes at meetings. She can be found knitting and taking notes, simultaneously, most of the time.

Des is a first-year student in the dual degree Archives/History master’s program at Simmons College, and is responsible for written website and social media content for DERAIL. Prior to arriving at Simmons, Des earned her undergraduate degrees in Political Science and Gender Studies at UC Davis and conducted research on gay and lesbian social movements in the United States. Des is also the Secretary for Students of Color at Simmons SLIS, and serves as Underrepresented Communities Chair for Quist, an LGBTQ history app.

Irina is an MSLIS candidate at Simmons College, graduating in the Spring of 2016 with a concentration in Archives Management. Previously, she earned a BA with a focus on Atlantic history at Bard College, where she developed a passion for social justice, particularly through the bringing of silenced voices to the foreground of the historical record. She currently holds positions as a graduate assistant at Simmons, and as the cataloging assistant for the Santo Domingo Collection at Harvard University. She is the social media chair for the Simmons chapter of the Progressive Librarians Guild.

For DERAIL, Irina is wrangling cats as the volunteer coordinator, creating playlists for everyone to tap their toes to during awkward silences, and facilitating online participation as the social media moderator. You can usually find her crying in the corner.

Jae is a successful adult human being and 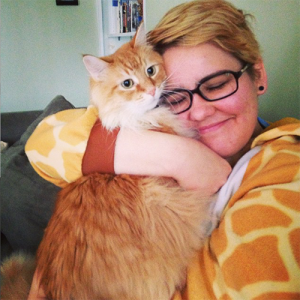 recommends saying this affirmation every time you make a mistake or do something foolish or are just generally struggling. They have been Lead Technology Reference Assistant (TRA) in the Simmons SLIS Tech Lab since April 2015. They excel at unjamming printers and pressing buttons on computers until the right thing happens. Jae also currently works the front lines at the Boston Public Library in Rare Books as a receptionist slash library aide and knows a lot of things about school librarianship. Before showing up to the library party officially, Jae worked as an assistant to the Visual Resources Curator in the Art History Department at the College of Charleston, where they earned a Bachelor’s Degree in Studio Art and Women’s and Gender Studies.

Jehan is an archives master’s student at Simmons College. She has an academic background in archaeology and cultural anthropology. She has spent a lot of time thinking about museums, race, and digital preservation (sometimes all three at the same time). She is DERAIL’s archivist and is working to ensure the event and the hard work of its organizers are never forgotten.

Jessea is a multi-ethnic, tattooed art historian turned oral historian. With experience in libraries, archives, and museums, she hopes to use her education to empower and preserve the voices of Asian Americans and Pacific Islanders. She is creating a digital collection of oral histories about the model minority myth as experienced by tattooed Asian Americans and Pacific Islanders called inknography.co.

Upon entering graduate school, Joyce was surprised to learn that explicit discussions about identity, racism, and oppression do not exist in core LIS curriculum. How are people and their intersecting identities not put forth as an integral part of the LIS equation, alongside information and technology? They are also disheartened that “diversity and inclusion” initiatives seem to only focus on the recruitment and retention of students and professionals of color in LIS without giving meaningful attention to WHY such initiatives exist in the first place. While recruitment and retention are important, is true inclusion possible without explicitly addressing and working towards dismantling the white, cis, hetero, patriarchal system upon which our institutions were founded and under which the LIS professions and schools operate? Please note that Joyce doesn’t know a damn thing; they just started engaging in these uncomfortable conversations within the past year and are simply hungry to learn more….

They have a special place in their heart for some kick-ass students at Simmons SLIS and ARL’s supportive network, but they couldn’t have found their “LIS” voice and confidence without Natalie, Laura, Katie, and Jehan…for whom they are forever grateful. Cheers!

Mckenzie has spent the last two years working and teaching at yarn/fabric stores and has recently migrated from Oakland, California to Boston, Massachusetts. She identifies as fat-positive, latina, queer, and femme, and is a first-year archives & history dual-degree student at Simmons. She is working as the graphic designer and facilitation consultant for the LIS Ed Forum.

Nancy is a first-year student at SLIS and also serves as the Acting President for the Library and Information Science Students Association (LISSA). She is a graduate of Barnard College, where she studied English. Prior to coming to Simmons, she worked in public relations and communications for an affordable housing agency in Philadelphia, where she originally hails from. Nancy is interested in issues of intersectionality and representation and work in public and government libraries.

Nicole is in their last semester of the dual

M.A. in Children’s Literature and M.S.  in Library and Information Science program at Simmons. Their research interests include improving disability/accessibility consciousness in libraries and higher education, storytelling, STEM education, social media, and much more. In their spare time, Nicole enjoys curling up with tea and a good book, or analyzing their favorite television shows. Nicole works as a Learning Commons Assistant at Simmons’ Beatley Library, a proctor for Disability Services, a Public Service Assistant at the Wheelock College Earl Center for Learning and Innovation, and volunteers as a social media coordinator for Considering Disability CIC, a social enterprise based in Leeds, UK.